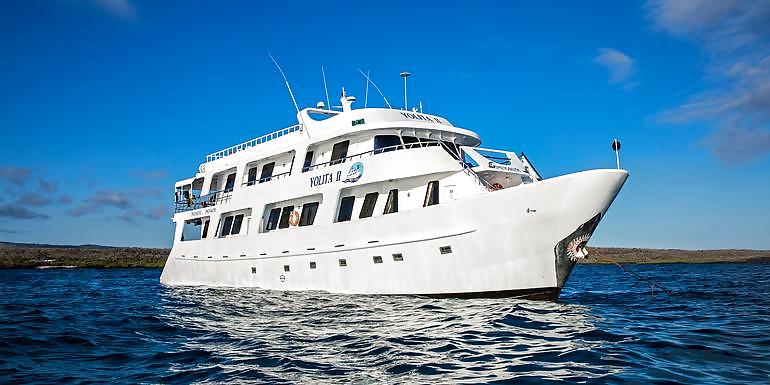 Arrive at any time. Arrival transfer included. There are no planned activities, so check into the hotel and enjoy the city. A G Adventures representative will greet you at the hotel and brief the group on the various aspects of the tour.

Take an early flight to the Galapagos Islands. In the afternoon, visit North Seymour Island to look out for blue-footed boobies.

Travel to the dramatic Kicker Rock in the morning to witness the steep vertical stone walls rising from the ocean. Continue to Cerro Brujo on San Cristobal to observe sea lions, marine iguanas, and seabirds along the beach. In the afternoon, head to Isla Lobos known for its friendly sea lions.

Sail in to Gardner Bay, an excellent swimming and snorkelling site. Head to Punta Suarez on Espanola Island. The southernmost island in the Galapagos archipelago is home to several wildlife species, including nazca and blue-footed boobies. A hike to the top of the cliff makes for spectacular photo opportunities. Punta Suarez on the western side of Espanola Island (also called Hood) is spectacular. Follow the trail through a rookery and learn the geological history of the island from the naturalist, including its dramatic volcanic features, climate, flora, and fauna.

Visit Santa Fe island for a chance to mingle with the iguanas. Continue to South Plaza for some great bird watching opportunities.

Visit the Charles Darwin Research Station to see the giant Galapagos tortoises and go on an excursion to the Santa Cruz Highlands. Free time for shopping or exploration of Puerto Ayora. In the morning, arrive in Puerto Ayora on Santa Cruz Island. Santa Cruz is the second biggest island in the Galapagos, and has the largest population. Puerto Ayora is its main town. In the afternoon, there may be the opportunity to visit the highlands and see giant land tortoises in the wild.

This morning, snorkel at Devil's Crown, a coral reef surrounded by an eroded volcanic crater, the perfect home for marine life. Look out for small sharks, rays and schools of tropical fish. In the afternoon, make sure you have a postcard to leave behind on a visit to Post Office Bay.

Visit the white sand beach at Chinese Hat in the morning, before an afternoon at Cerro Dragon for an opportunity to break out the binoculars and do some excellent birdwatching.

In the early morning, explore the mangrove lagoon at Black Turtle Cove before transferring to the airport for a flight back to Quito. Enjoy a final night out on the town.

Depart at any time.
Overzicht

Meals Included: 9 breakfasts, 7 lunches, 7 dinners
Meals Budget: Allow USD120-160 for meals not included. Drinks and tips on board not included.